Hi again. Since the last time I posted ( two years ago!) the railway has had a lot of progress made. Most of this is due to making the railway better suited to public this has included the construction of a new ticket office next to the turntable. In fact dipwood halt is getting upgraded right so the rack railway is now connected to the turntable. A new signal box will be constructed next to the new line with a new platform for it. The water stop (coghill) has also gone through a major visual improvement with the placement of new ballast over the track. the Carriage shed is externally complete. The running lines have yet to be fitted though.     Also krokidile is about to go in for a winter's overhaul. The overhaul will include a upgrade to 24 volt with two new motors and a much better controller.

That's all for now, I hope to upload some pictures soon.

so until next time bye!
Posted by samsuedave at 11:42 No comments:

Well what a year it has been for the railway. We have had three very successful running days and have been adding improvements to the tracks. We still are getting more machines for the workshop and new locos are coming to the railway. The biggest restoration job for 2011 is the repainting of the viaduct on the rack railway.
From all the members and myself we hope that you have a very merry Christmas.
Posted by samsuedave at 04:15 No comments:

Well I finally got up to beamish last Saturday and to my surprise there was hardly any snow there! Because there was no snow I was able to run krokidile around the site doing odd job's. One of these jobs was picking up the last lot of leaves so you can now see what a ridiculous site it is! 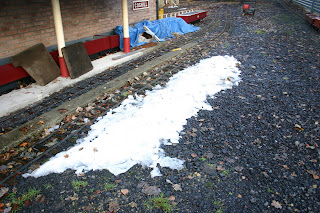 When I finally got up to the railway this was the biggest piece of snow I could find. But according to the weather forecast more snow is on the way so I might get snow pic's of the railway. 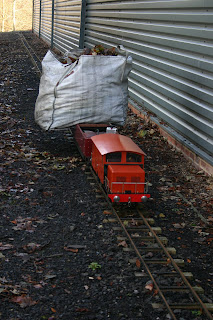 So this is krokidile hauling the leaf train. Seeing krokidile with oversize loads is now a common thing. The way it works is that we have placed large bags around the site and when the leafs fall down we pick them up and place them in the bag. Then krokidile come and we lift the bag on to the train and krokidile hauls the bag to the compost bin. 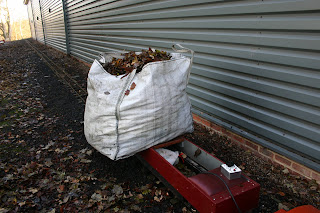 Now you know how much leaf's fall down on to the track. 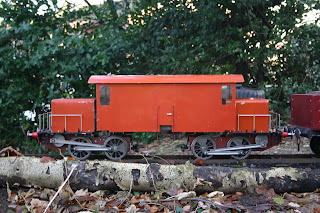 After that was done krokidile had a break so I took some arty photo's of it. 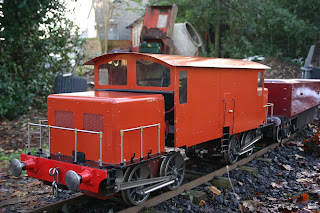 The paint is a bit chipped. Some touching up is needed. 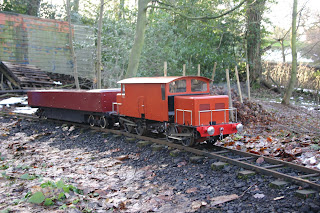 Krokidile on the embankment with the coach. 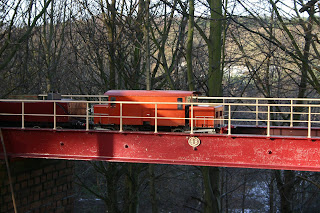 On the rack bridge and in the sun. 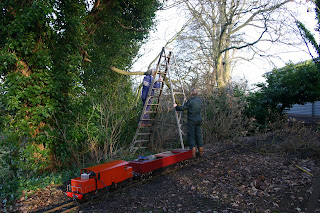 After that break some dangerous looking branches were overhanging the railway and so needed to be chopped down. Krokidile was used to bring the stepladders... 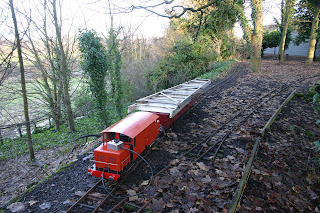 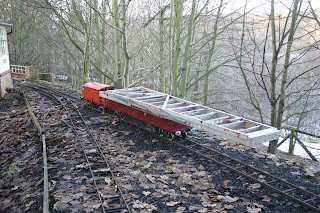 Ready to take the step ladders back to the work shop. They just about fitted through the bridge.
Before the snow came krokidile hauled the wood panels that shall be used in the carriage shed from the workshop to the construction site. Some broken sleepers have been found so will need replacing. So it looks like krokidile will still be a busy engine still!
untile next time bye.
Posted by samsuedave at 08:14 No comments:

About the group and BCR

samsuedave
BMEG (beamish model engineering group) was started over 20 years ago by Ken Swan. for the first 15 years the railway was "hidden" by the museum. However with a change of museum director in 2009 saw the railway being asked by the museum to run for them on their four days events. since then we have run with a exhibition on model engineering being put on each year in September. In 2012 we opened the rack railway to public and was proving to be a major success. we hope that you find this blog of the railway a interesting read.

Information about the BCR

Running days for the BCR and ticket prices

The Beamish Cog Railway operates two railway systems, the level railway and the rack railway. The level can take 10-14 people at a time whilst the rack railway only takes 3 people at at a time. Boarding of both trains take place at dipwood halt. Ticket prices are as follows;
Level railway, trains every 3 to 4 minutes tickets are 50p per person.
rack railway, trains every 5-7 minutes tickets are 1.50 per person.
tickets are available for purchase at the ticket office at dipwood halt.


The railway has no more running days for 2012


Please note that these running days are weather permitting and an event might happen that is beyond our control and we might have to stop running for the safety of the passengers.